Monday was a life admin day – organising, grocery shopping, jogging and admiring a complete rainbow that nested itself in the mountains. As always, we had dinner together downstairs as the snow fell down outside. We discussed the somewhat exciting topic of starting proper uni the next day and the somewhat controversial topic of ‘which country does your country hate?’

Tuesday was a uni day. We started our first lot of classes. In the morning I took my SLR out for a walk and enjoyed the cloud-free skies. I also bought a German toasted sandwich with local cheese, salami, lettuce and relish which was good enough to remember 4 days later. At 11am, Jena and Weng Mee and I walked to creative writing in the sunshine, a welcomed weather change to the snow from the day before. It was good! Turns out we’re actually creative writing for film, which I personally am excited for. That night I had my German class with 9 other exchange students – all of whom but me are computer scientists (what proves useful when your internet in your room breaks down – thanks Adam). It went pretty late, we walked home in the dark and drank wine.

Wednesday was another uni day. I had Media Distribution in the morning (where I learnt the assessments/examinations have been replaced with just pure attendance yay!) Another creative writing lesson in the afternoon. After uni I walked to Maddie’s house (as soon as the snow started to really flipping pour down) to bake a pavlova for our pot luck dinner that night. It had been organised that we’d go to one of the other exchange students colleges and everyone would bring a dinner from their country. Oh my gosh – it was phenomenal. There were dishes from Chile, Costa Rica, Korea, Poland (and home made 60% vodka), Slovakia, France, Mexico, Finland, Netherlands, Turkey, the States and Belgium (well beer as opposed to food) to name a few. As I’ve already mentioned there are some serious cooks in our dorm which led to some extreme over indulgence particularly on some Finnish chocolate biscuit slice and some homemade French apple tarte tartin. Also tried mac and cheese for the first time! Our pav went down a treat and looked great despite having to walk with it for 20 minutes balancing on some cardboard (thankfully the snow held off). 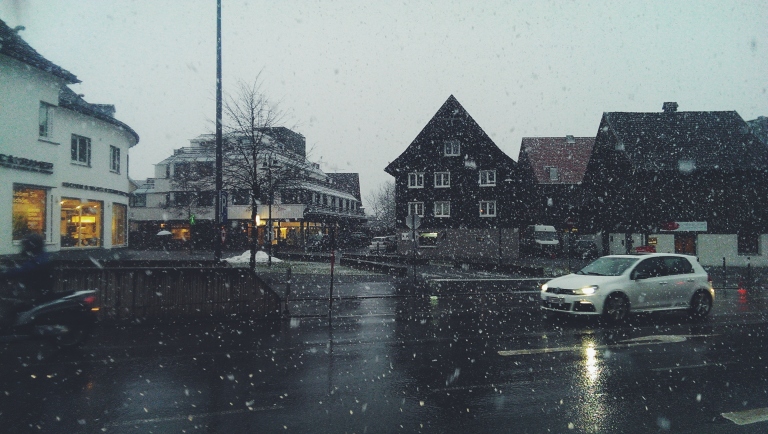 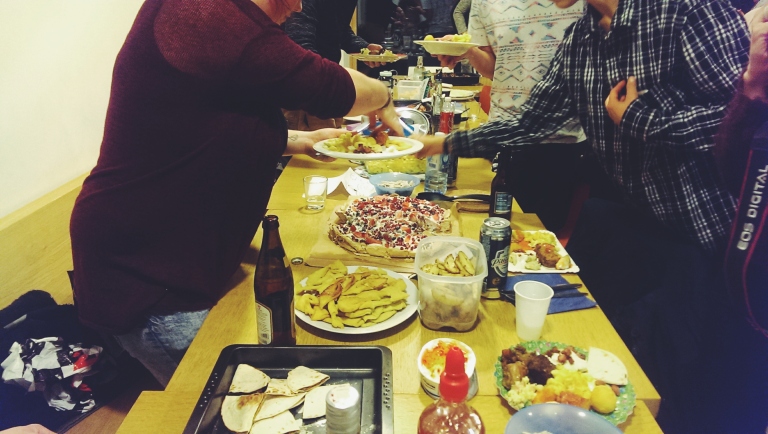 This is a sweet treat Jena and Chloe from the states made – Puppy Chow. Essentially cereal with chocolate and peanut butter and icing sugar haha. 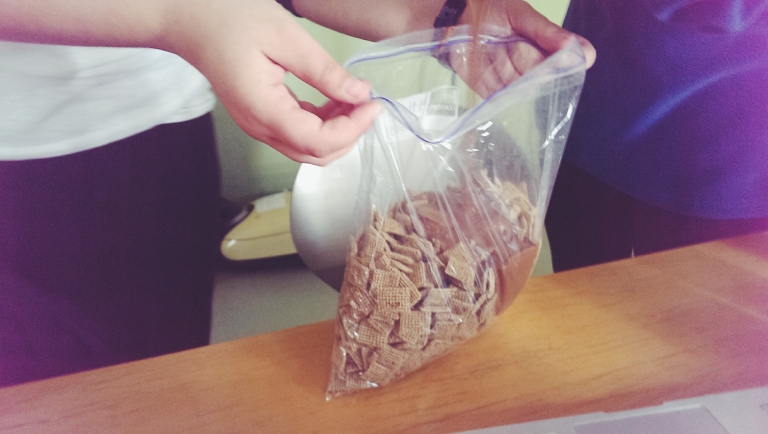 Wednesday night/Thursday early morning I woke up from a nightmare that exchange was over. Sounds ridiculous but is a serious indicator of how much I’m going to miss this.

Thursday was my first animation day (my major). It’s awesome! There’s 4 tutors and 6 students haha which is intimidating but also so helpful particularly as they’re all really experienced (and have sweet Darth Vader tattoos). It’s mostly a class of exchange students but we’re making friends with the locals as well which has been really nice. We watched a lot of videos of motion graphics and talked about our semesters project. I particularly liked this video. Actually, a lot.

During this class, I was also sent a link to an interview I did which ended up being published on austria.com haha which was a surprise. Very funny.

It was furthermore productive in that I booked tickets to Berlin for Easter! I’m so excited.

That night there was an African themed party on at school and then later at a bar in town but I was feeling pretty knackered after staying back for a while and so went home, had dinner, had some vending machine choccie (this level one dispenser will be the death of me) and watched Das Leben der Anderen (a German movie for cinematography homework) in bed. I fell asleep at 9:30, about 10 minutes in. I’m exhausted for all the right reasons. I woke up again about an hour later and continued working until about 1:30 on a motion graphics project I’m doing. I began to pack up when I heard a knock at my door. Thinking it was a locked out friend, coming home from the party, I opened it. There before me stood a somewhat unclothed man who definitely is not from our building asking for drinks. I offered him my Australia t-shirt (despite strong emotional attachment to the garment) and sent him on his way – a new patriot of Down Under. 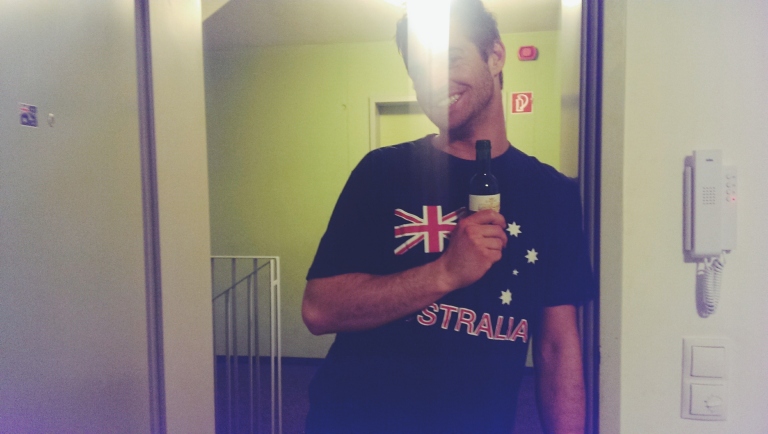 Friday was another big uni day – web design classes then animation again which went well. It was beautiful weather so when Chloe and I left at 5 we went for a bit of a walk around looking at Nike shops etc and then did a big trip to an Aldi on the outskirts of town with Jena (and ran into Austrian Carlos Santana). We’d also hired a van for the weekend so 8 of us went out to dinner in a nearby lake side town called Bregenz – the capital of the state of Vorarlberg, about 20 mins away from where I am. We got killer pizza and I ran into some people who I know from church (and who actually introduced me to it!) Small world it’s becoming. 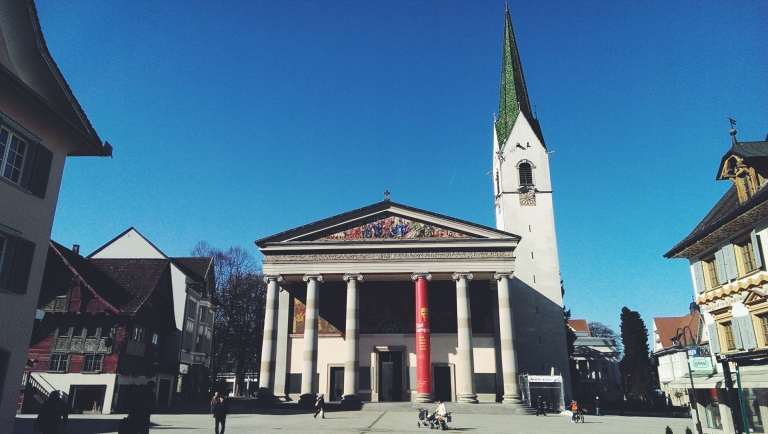 Saturday morning woke up early and chaotically packed for the weekend. We’d planned to leave in our 9 seater white VW van at 7:30am. We departed at about 8 and headed for Füssen – a small town in the south of Germany, spirits high and the volume of Bon Jovi even higher. The colours and mountains were insane, picturesque.

Nearby was Neuschwanstein Castle which was our next stop where we met up with the other van from Sebastianstrasse and Martin’s car. Neuschwanstein is a beautiful castle that the Disney logo is based on. I took my drone to get some footage but due to not only my SLR, phone but also my GoPro seizing up as result of the cloudless cold weather, I didn’t want to risk sending it up 1000ft which was a massive shame but i’ll be back.

After a significantly longer time at the castle than anticipated, we went onto Munich where we arrived at ‘guenstigesschlafen24’ our apartments for the night. For some reason they’d split us up, so whilst a few of us were at number 21, the rest of us were a hefty walk away at 131. Despite that, the places were nice particularly for their cheap rate – Isabella, Nevia (Chile), Alejandra (Mexico), Weng Mee (Netherlands) and I in a room. Exhausted, we got ready to go out, chowed down some Ritter Sport chocolate and wine, and in 20 mins met the boys back at their place, before heading to the Bahn and catching the train into the centre. Here we got an impulsive ‘Döner kebap’ a much needed energy booster after an unsuccessful attempt of trying to find the other group. Cheap meat and hot bread in our stomachs, we continued on, having heard news that the others were at Bar 77. Cutting the story short – we searched for about 2 hours, some of us (or one of us) shoeless, cold and asking every German passer by if they knew Bar 77, we finally found someone who said they did. They pointed to the street that it was on, where we arrived at number 77: an Italian restaurant. Laughably annoying. We ended up finding them at a different club where we hung out for a while then made the commute home (where we lost our token blue-haired Dutch friend).

The local chemist in Füssen 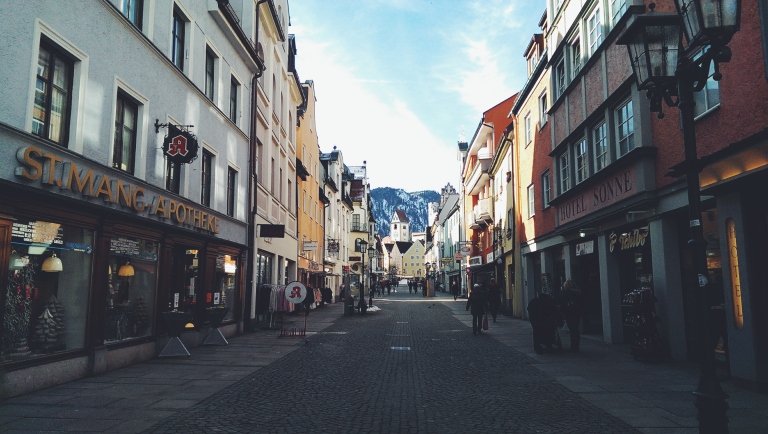 A local jumping in on the shot with his dog (left) 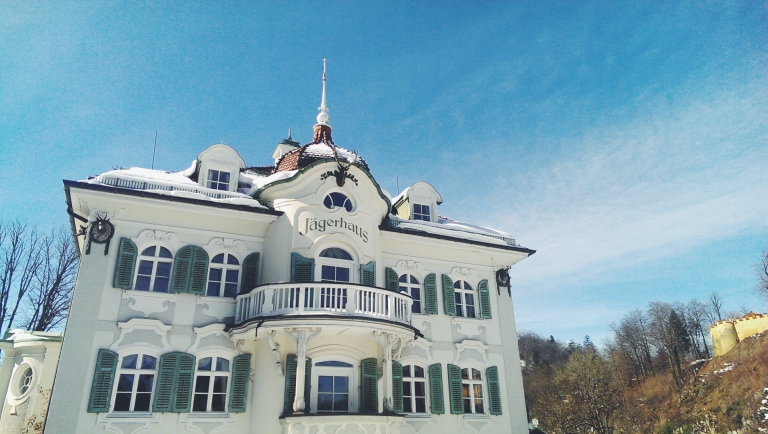 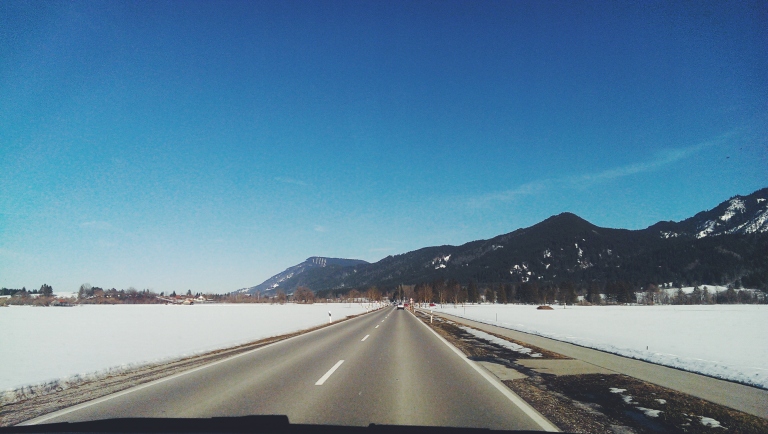 Schloss Neuschwanstein from a distance 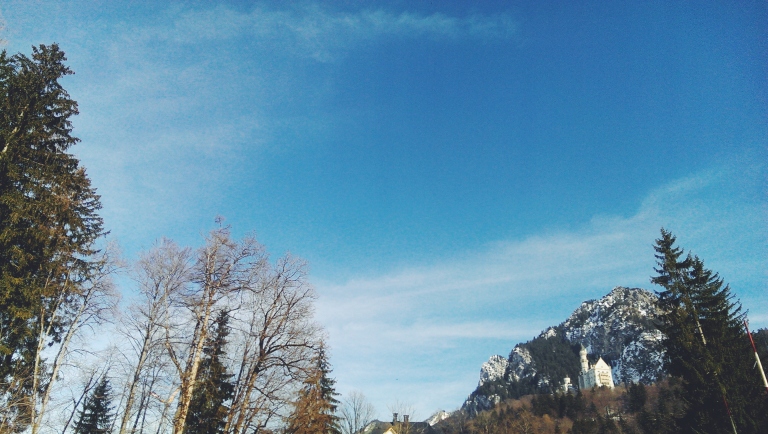 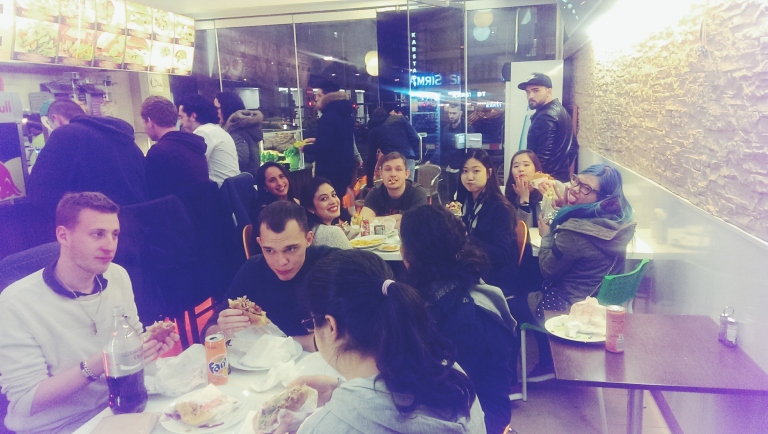 Sunday morning we awoke and headed to Innsbruck, somewhat sleep deprived but still full of high spirits particularly thanks to DJ Adam. A gas station pick me up also helped (baked rolls and curry wurst trump your usual Cornetto/Mars Bar selection.) The drive there was INSANE. We travelled through the alps, sun shining down, admiring little churches on big mountains.

On arrival to Innsbruck, we separated and walked around the city for the afternoon. Adam and I climbed up a city tower where we got a view over it all. The colours of well designed Austrian buildings were phenomenal set against a backdrop of white capped mountains. There’s also a huge ski jump which made for a good sight. We met up with the others after a couple of hours, where Stefan noticed a local shooting hoops and had to join being an avid basketballer himself (as you would be, being just under 2m tall.) We watched for a while then had an early dinner at Vapiano. I picked up a vegetable and mozzarella strudel instead which was fantastic. We piled back into the van, and watched the sun set behind the Alps as we started the 2 hour commute back to Dornbirn – exhausted, but satisfied by fantastic weekend.

Stefan playing basketball with the locals 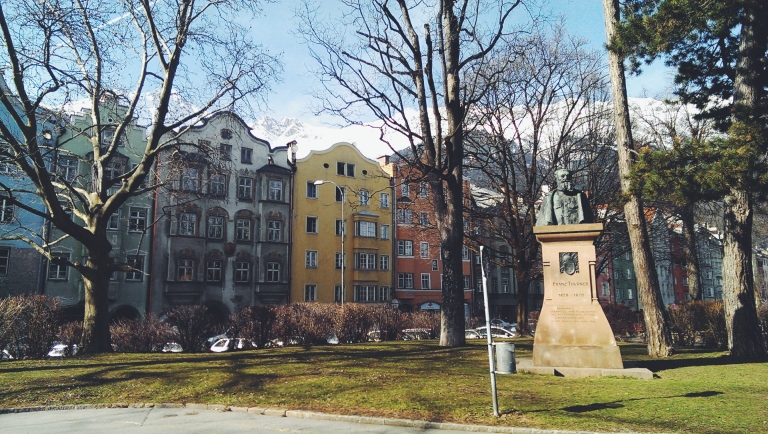 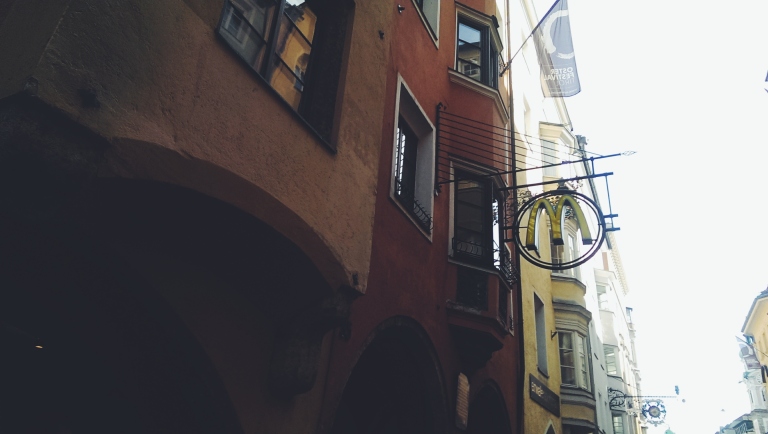 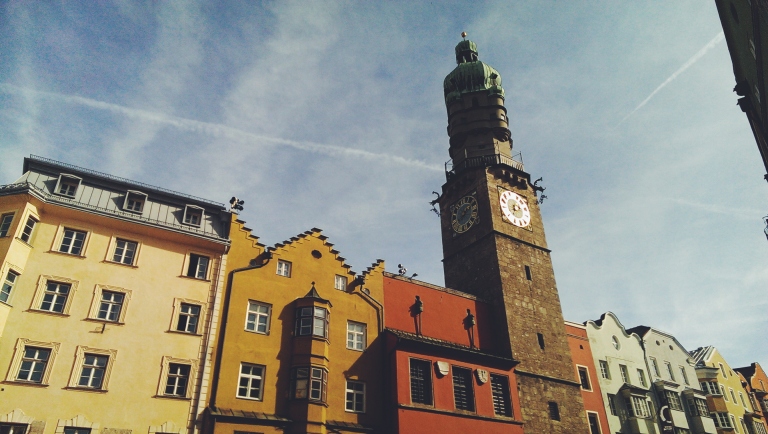 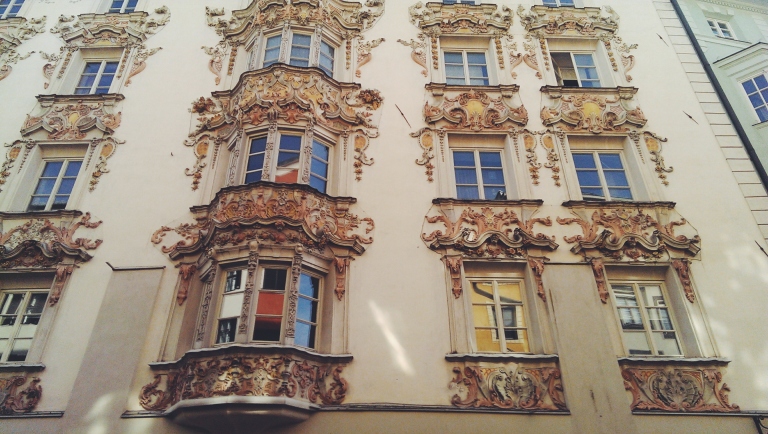 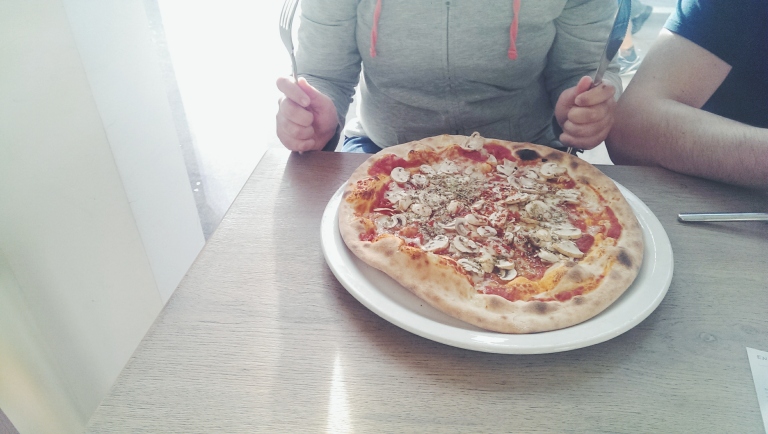 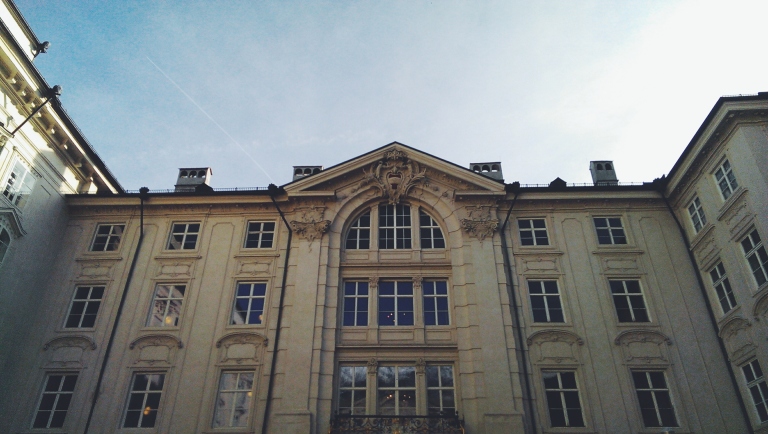 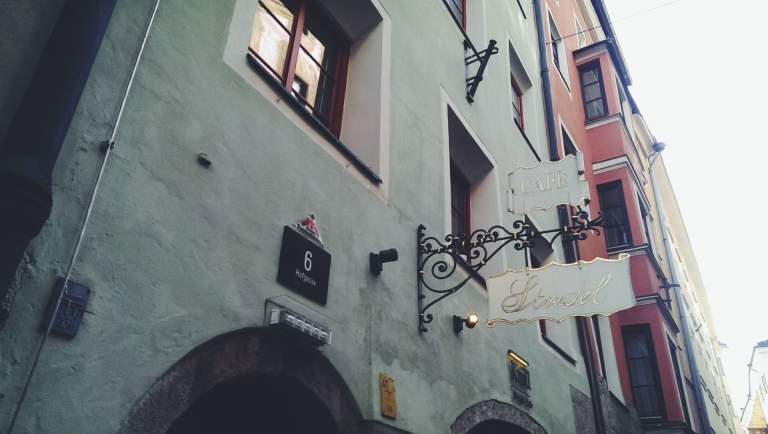