So the first week is down and a lot has happened. For the sake of a better word, everything so far has been amazing. The lowest point would’ve had to have been when I spent three hours in a phone shop because for some reason my phone was playing up but even then I got to practice my German technology vocab, meet a nice Turkish phone repairer and become friends with employees to the point of them not charging me for the service and furthermore making my 15 euro a month plan, 10. It was a bit of an ordeal to the point of a shop wide celebration when it got resolved.

Some high points have been

– When our class went on a short snow hike/ski excursion with my class up Boedele and finished off with some hot choccies at the top. For this, I had to buy some hiking shoes. Being stingy, I asked for the ‘guenstiges’ shoes they had at the shop which means the biggest bargain. He showed me a pair which were 110 Euros. I ummed and ahhhed and asked if he had anything cheaper. He then pulled out a box – the last of it’s kind. In there were the most devastatingly colourful hiking shoes I’ve ever seen haha. They were on sale and 60 Euros. I kind of love to hate them.

– The numerous communal dinners in the common room, slamming the Australian vs American vocab

– Going on an excursion to the farmers markets, being given 15 euros, buying lunch in German and coming back and eating it. It consisted of cured meet, a special Austrian mountain cheese which is amazing, fresh local apples and special dark bread with nuts.

– Eating lunch in the Mensa/Cafeteria which is a restaurant at the Uni. The first day they shouted us Schnitzel – of course.

– Hanging out with the ‘Moose Family’ (The self-titled name given to our college/student house which is on Moosmahdstrasse – the German word for Moosmahd Street). Most nights we’ll go to the common room and play beer pong or hang out in someones kitchen over 33c beers. These times often consist of miscommunication and consequently a lot of laughter. Everyone is super generous and really welcoming.

– Walking absolutely everywhere! Seriously. Everything is able to be walked to. The furthest place I’ve walked was to the largest shopping centre which was 30 minutes away. Whilst everything is nearby, it doesn’t feel like a claustrophobic town at all.

– Going for a jog at sunset and watching the sun hit the snow on the mountains to form this pinky/orange tint to the slops. The backdrop to everything here is amazing. It’s so hard to concentrate when the view out your window is postcard material (speaking of haven’t been able to find any yet unfortunately. Maybe DIY).

– Attending uni in general. The facilities are amazing, everyone is so helpful, allowing us to rent out 5D Mark IIIs, access the uni 24/7, for the smokers they evne provide lighters. The Uni is located next to a wholesaler bakery so the smell in the morning as you walk down the river towards the school is so good, it’s torture. There’s also an Australian teacher (Sharon, yes, those of you from Surfection) who wears ugg boots and talks often of Vegemite. She got us making 5 minute posters of our countries and present them to the class. Ours was pretty stereotypical.

– The highest point of all though would have to be the people. There’s such a great group of about 35-40 exchange students from all around the world – Czech, Slovakia, Poland, The States, The Netherlands, Finland, Turkey, France, Chile, Korea, Mexico, Costa Rico to name a few. It’s been awesome learning about their way of life, tasting their food and alcohol and realising that likemindedness is intercultural. We have a facebook group where every day someone is inviting someone else to something, whether that be a hike, a gym appointment, buying olive oil. Occasionally you get a post like this from your token Czech:

‘Ok guys, i will never ever ride my bicycle when I am drunk. The fact that the way which usually takes about 20 minutes of lazy walking took me about 2 hour is Ok. The fact that I got lost so many times and almost smashed my face is Ok. But when i got text message “Welcome to Switzerland” I knew there was something wrong with me. grin emoticon ‪#‎ThugLife‬ ‪#‎FuckBicycle‬‘

The cheers and comments that he received when turning up late to class the next morning were very laughable involving requests for postcards and exclamations of ‘he lives!’

Overall, my time here so far has been phenomenal and I can’t believe I ever doubted otherwise. Here are some pics from the phone that has been causing me much grief.

(I’m off to school to get shouted a sweet Austrian breakfast yiew!) 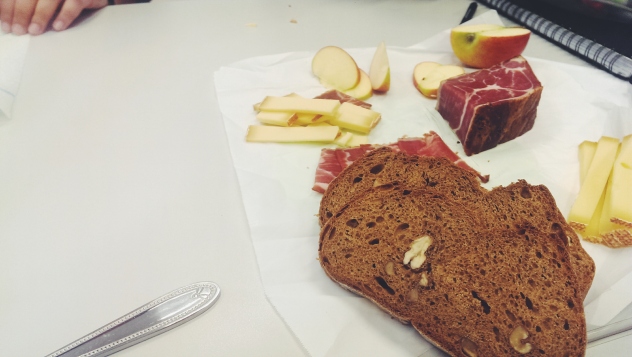 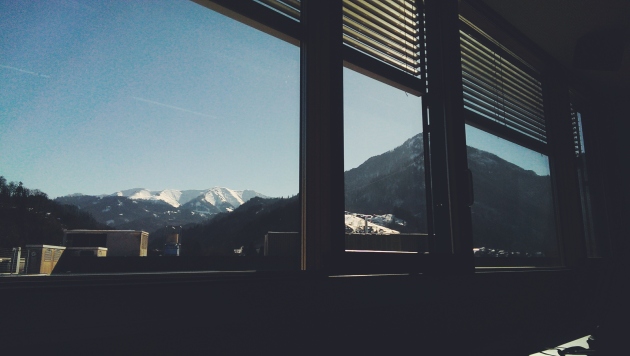 2 thoughts on “Week One”